The Daily Reporter: Coldwater Solar Farm will have economic impact 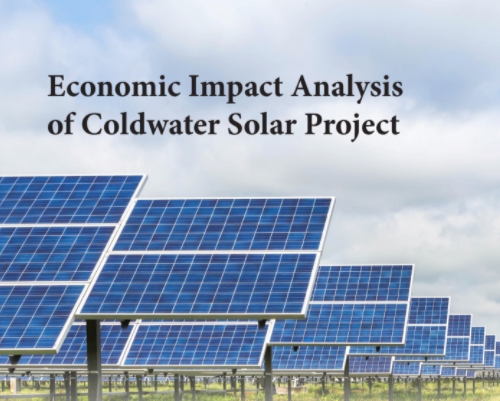 BRANCH COUNTY — With a proposed 150 MW commercial solar farm spread around 1,500 acres of farms, land owners are looking at land leases to produce a steady income for 15 to 30 years with a better more stable income than crop farming.

Sam Gaglio said he and five siblings are “leasing to keep the family farm legacy for future generations.”

Turning the land over to solar farming will allow the land to “rest and rejuvenate” during the 15 to 30 years of the lease no insecticides or chemical fertilizer will be used which will benefit the the watersheds. Ground cover planted under the panels will protect the land and help drainage.

Apex Clean Energy and esaSolar are partnering for the massive project $150 million investment they hope to complete by the end of 2023.

One attendee during a Tuesday night Ovid Planning Commission hearing on Solar Ordinance revisions asked “What is in it for the township?”

There will be massive economic impacts locally for governments and the economy, according to estimates provided after a study presented to local economic development officials and the Branch County Economic Growth Alliance.

An independent study by Dr. David Loomis at Illinois State University, said the project will generate over $21 million in direct tax revenues over the estimated 30 years life span.

Under current taxing it would produce over $11 million in the first 10 years.

Currently, solar farms are taxed as Industrial Personal Property at 50% of its cost at $75 million the first year. That is depreciated down to a minimum 23% over 15 years.

The added tax value is five times the current industrial personal property valuation, according to the study. In the first year it amounts to a 5% increase in taxes countywide.

Gov. Gretchen Whitmer vetoed legislation that would have taxed solar farms at a flat $4,000 per megawatt with no depreciation passed during the lame duck session of the legislature.

The amount would have been less than the current system, but more consistent.

Congress also continued renewable energy tax credits set to expire in December during its flurry of bills passed in December.

Sean Stocker and Brian O’Shea, from Apex Clean Energy, laid out others who would benefit. The economic study estimated there would be 242 construction jobs during the 12 to 18 months of work, bringing in $5.5 million in income. Thereafter just over 10 permanent jobs would produce $377,000 a year income. There would be additional jobs and income and operations for the state outside this area.

In addition to the solar farm, there is $5 million in utility equipment such as the substation and other related transmission gear.

Like agriculture property, the Industrial Personal Property is exempt from 18 mills school operating millage and 6 mills of state education fund taxes. The utility equipment is not. Neither is exempt from school sinking fund millages.

Coldwater Schools could expect $505,000 from the 18 mills on the utility equipment over that 30 years.

The study also uses economic models to project a total economic impact of $59 million on the local economy during the 30 years of the project from employment earnings, local investment, land lease payments, and the property tax payments.

One of the delays currently is waiting for the grid operator, Midcontinent Independent System Operator, to determine what, if any, transmission capacity increases are needed and the cost. MISO has delayed request since 2019.

The other is who will buy the power. O’Shea said the firms “would not just build this and wait for a customer.” Finding a power purchase agreement “has not started in earnest yet.”

But with the major power companies in Michigan seeking to increase its solar capacity seven fold by 2025, there should be customers available.